68 reviews of Smoothie King Center "I've never been to an indoor concert on the floor level bf! It was a super special treat for my mom and I and one of her. 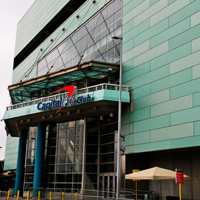